Vitamin A and Beta-carotene – January 2010

VITAMIN A AND BETA-CAROTENE – WHAT WE HAVE DISCOVERED:

The continuing search for compounds that enhance the production of the functional IKAP protein revealed that vitamin A and beta-carotene increase the production of the functional IKAP transcript in FD-derived and normal cell lines. These vitamin A forms increase functional IKAP levels in a similar manner to that which occurs in response to the tocotrienols. In fact we have observed that the simultaneous treatment of cells with vitamin A and the tocotrienols results in a greatly enhanced production of functional IKAP. When one reports on the effect of a compound on gene expression in cell lines, the question always arises as to whether this effect occurs in people who take the compound. To address this question, in addition to being the “researchers”, Sylvia and I were the “guinea pigs”. We have taken Vitamin A and the provitamin beta-carotene and have seen a clear increase in the amount of IKAP produced in our blood cells. These results reveal that these compounds enter the blood stream where they mediate the same effects seen in the laboratory cell lines. While we don’t have definitive proof that the vitamin A compounds will affect IKAP levels in the nerve cells of our bodies, we have evaluated the impact of these compounds on neuronal cells in the lab and they respond very well. Before going “public” with our findings, we often will ask parents of some of the local children if they would be willing to have their child ingest a supplement and report back to us any effects noted. The results have been VERY encouraging. Parents have reported significantly increased autonomic stability and increased cognitive function. The commercial products that Sylvia and I have been testing in the lab and have been ingesting are the “Non-Oily Dry A” product produced by Vitamin Shoppe and the “Dry Beta-carotene” product made by Solgar.  Click here for the “Non-Oily Dry A” product produced by Vitamin Shoppe and click here for the  “Dry Beta-carotene” product made by Solgar.

Background information on Vitamin A

Vitamin A is obtained by our bodies either in the form of vitamin A or as a provitamin A such as beta carotene or similar molecules. The ingestion of excessive amounts of vitamin A can be toxic. The Dietary Supplement Fact Sheet provided by the National Institutes of Health presented below provides guidance on the Upper Intake Limits for vitamin A, depending on the age of the individual. According to this information, a child that is between 9 and 13 years of age can take 5610 IU (1,700 mcg) of vitamin A. An individual between the ages of 14 and 18 can take 9,240 IU (2,800 mcg) of vitamin A. How much should you give your child? Clearly age is not necessarily a good measure when it comes to FD children as they tend to be smaller than unaffected children. As a guide to how much vitamin A to give your child, we suggest that a 19 year old healthy female may weigh 100 pounds and her upper limit would be 10,000 IU (3,000 mcg). It would therefore seem reasonable to extrapolate that a 50 pound FD child could receive 5000 IU (1,500 mcg) of vitamin A each day. Further extrapolations should be easy for each of you to perform according to the weight of your child. It is important to keep in mind that if your child is receiving vitamin A from another supplement or from a formula, the total amount of vitamin A that you can give him/her should not exceed the upper limit. When calculating how much vitamin A to give your child, please consult your physician. 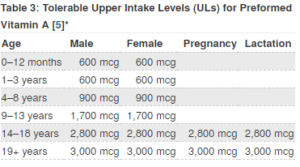 Contrary to the impact of the ingestion of vitamin A, the ingestion of large amounts of beta-carotene is not toxic, as the body will only use the beta-carotene if the body is not being provided with a sufficient amount of vitamin A. What this means is that there is more leeway when ingesting the beta-carotene. For our studies, Sylvia and I have been ingesting either one “Dry A” capsule or one beta carotene pill. In us, a clear effect of these treatments was apparent when we ingested either the “Dry A” capsule that contains 5000 IU of vitamin A (in the form of retinyl acetate) and 5000 IU of beta-carotene, or the tablet (Dry Beta-Carotene) that contains 10,000 IU of the beta-carotene. What you should keep in mind is that the beta carotene is considered non-toxic and, as such, a higher dose of this provitamin A is not believed to have any negative effects. To provide a perspective, LifeExtension produces a product that is 65,000 IU per dose. It should be noted that the ongoing ingestion of an excessive amount of beta-carotene can cause the skin to turn somewhat orange in color. This color change disappears when the supplementation is stopped.

There are many interesting and sometimes contradictory studies in the literature that are worth noting. There is a study that suggests that ingestion of large amounts of vitamin A may cause osteoporosis and there is a study that indicates that the ingestion of beta-carotene is associated with improved cognitive function. While these studies, in our view, are not conclusive, we would suggest that if you provide your child with an increased amount of vitamin A, you also provide calcium supplementation.

Please note: Before making any change to your child’s diet, you should discuss this matter with her/his treating physician.