TYRAMINE – WHAT WE HAVE DISCOVERED:

People with Familial Dysautonomia have decreased MAO levels similar to those taking MAOI’s (Monoamine Oxidase Inhibitors). Thus, if someone with FD eats tyramine-containing food, their insufficient MAO will not be able to remove the tyramine causing their tyramine levels to rise. This rise causes a “hypertensive crisis” due to constriction of blood vessels and an acute elevation of blood pressure. Symptoms include palpitations, nausea and vomiting.

This list was compiled from approximately 20 tyramine lists found on the internet. While similar, no two lists were identical. In fact, most lists conflicted. For example, mozzarella cheese appears in the safe column on most lists, but also appears in the caution column on some lists. This variation is caused by the same food having different amounts of tyramine in it when tested by the list-maker.

Because the same food may have different amounts of tyramine in it from batch to batch, lot to lot, preparation to preparation, there will not be a fool-proof list. In classifying a few items, such as beets and spinach, they typically appeared in the safe column however they were placed in the avoid column due to preliminary scientific results from the Laboratory for Familial Dysautonomia Research at Fordham University. 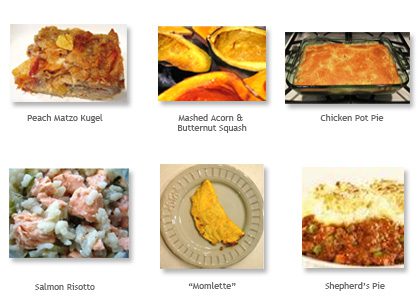 Looking for new, tasty and safe easy-to-make tyramine-safe recipes designed to please every member of your family? Each featured FD NOW recipe has been made from scratch, and has been sampled in our kitchens by at least one person with FD with no adverse side effects.

Click on any image above to view and print a PDF of the recipe.