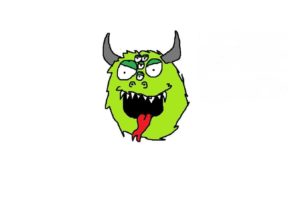 In the world of Familial Dysautonomia, what is a crisis and what causes crises?  Like most disorders, FD has its own unique vocabulary describing its characteristics.  For example, migraine sufferers experience “auras.”  Epileptic patients have “seizures.” Those with FD endure “crises.”  There are many textbook synonyms for crises including vomiting attacks, hypertensive crises, and autonomic storms.  When our son Andrew was younger, we asked him to describe crisis in his own words.  He took out paper and a marker and drew the picture of the monster above.

The hellish tell-tale symptoms of crisis are uncontrollable retching, drooling, and skyrocketing blood pressure and heart rate. When the Crisis Monster is lurking in the shadows, about to pounce, Andrew instinctively knows.  He may get a bad taste in his mouth or start to feel nauseated. As his vital signs go haywire, he can feel the monster creeping up behind him.  With the first retch, the Crisis Monster attacks.  With shaky hands, Andrew uses a suction machine to clear his excess saliva, and we try calmly to administer rectal Valium. Because these violent episodes can potentially lead to a stroke or pneumonia (caused by inhaling the excessive saliva into the lungs), heavy sedatives, like Valium, must be administered immediately.

Most people with FD experience crises.  Some are in crisis or are on the brink of crisis daily.  Our son says that crisis is one of the worst parts of having FD.  It is such a horrific experience that asking him even to think or talk about his crisis symptoms creates intense anxiety for him.  As a parent, helplessly watching your child’s body being physically attacked by a wild beast is brutal, frightening, and heart-sickening.

In Andrew’s early years, little was known about what caused crisis. The monster appeared to attack without warning, like a jump-scare. Beyond the obvious guesses at causal factors, like illness or infections, we’d grasp at straws like minor stressors, fatigue, or seasonal changes. Fortunately, the research has come a long way and we’ve learned more about what causes crisis. It turns out one of the major causes is ingesting too much tyramine, a substance that is commonly found in certain foods.

Since 2003, Drs. Berish Rubin and Sylvia Anderson have been rolling out safe, available and proven treatments that decrease the number and the intensity of crisis!  These breakthroughs include nutraceuticals like tocotrienols, EGCG, genistein, prebiotic and probiotic, vitamin A, and beta-carotene.  These breakthroughs also include diet changes like limiting protein intake and avoiding tyramine. Click here to learn more.

By following all of these cutting-edge treatments, Andrew has only had 2-3 mild crises in each of the past three years compared to triple the amount and severity of crises he suffered before.  He hasn’t missed a day of work since he started working at a theatre over a year ago.  These groundbreaking treatments give Andrew more control over his body and his life, allowing him to stay one step ahead of the Crisis Monster.