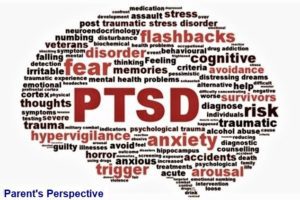 In a previous blog article, we explored what it’s like for someone with FD to deal with PTSD, also known as post-traumatic stress disorder.  This article explores PTSD from the FD parent perspective.  Just to review, PTSD often occurs with military veterans.  On the battlefield as soldiers, they suffer great trauma, dodging enemy bullets that could kill them at any time.   When they return to civilian life, they are surrounded by potential triggers that remind them of the gunshots they heard in combat. For example, hearing fireworks involuntarily throws them back in time, reliving their trauma. They take cover. Their hearts are racing.  They uncontrollably launch into fight or flight mode, reacting to what they perceive as imminent danger.

Raising a child with familial dysautonomia, a rare and debilitating condition, means as parents we live in a chronic illness warzone.  Like the soldiers, we remain on high alert, constantly susceptible to PTSD triggers. In my FD world, one of our triggers is hearing our son, Andrew, retch because we know from experience that what’s about to happen is inescapable. An “autonomic crisis” – a life-threatening physical attack similar to a seizure – is minutes away, and we quickly enter “fight” mode.

When our son was younger and we’d hear that first retch, we’d rush him to the hospital.  Today, with the help of in-home nursing, that one initial, fateful retch converts our home into an intensive care unit.  Like that veteran with PTSD, our hearts are racing.  We are instantly having frightening and intrusive flashbacks of when Andrew was in unrelenting crisis for six months, his emaciated body ceaselessly writhing in anguish.  We swiftly transform into frantic yet focused medics, scurrying around collecting our weapons against FD; the pulse oximeter, suction machine, IV pole, gastrostomy-tube bolus, rectal medication, pill-crusher, syringes, and Farrell bags.  It is terrifying and exhausting.

Besides hearing retching, there are other PTSD triggers for FD parents.  For us, just hearing, “I don’t feel good” sounds like a loud siren going off inside, placing us on alert that a relentless crisis is looming.   Watching Andrew stumble causes PTSD, setting us back to when he suddenly fell down the stairs, and broke his femur.  Even something as seemingly innocuous as noticing his eye is red can cause PTSD, prompting traumatic memories of an eye abrasion that doctors worried would cause permanent blindness. (For more on FD symptoms, click here)

For me, when I feel triggered, sometimes PTSD overtakes me; I’ll stay in a repetitive emotional loop, replaying horrific scenes from the past.  My brain will relive the time Andrew coded after back surgery.  I’ll replay the time doctors forcefully yet imprudently recommended surgically rerouting his esophagus out of the side of his neck.  I’ll mentally repeat the time he dropped down to 80 pounds, rendering him so weak he couldn’t stand.  Gratefully, sometimes I am able to anticipate a flashback and can take steps to circumvent the horror show.  This involves trying to distract myself by doing a task I have control over, like laundry, or organizing a closet.  I also work hard to stay present and not “pre-live” events.  I stay in the moment by noticing my surroundings, smelling lavender essence, and looking at the clock.  What makes coping with PTSD in the FD world even more difficult is that we remain in the daily fight, always bracing for the next trauma.