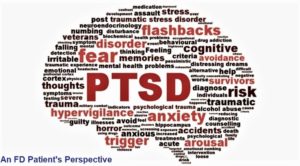 Most of us probably associate PTSD, post-traumatic stress disorder, with veterans.  The classic example occurs when soldiers returns from war.  Back on the battlefield, they suffered great trauma, dodging enemy bullets that could take their life at any time.   In civilian life, when they hear a car backfire, they are instantly reminded of the gunshots they heard in combat.  They are involuntarily thrown back in time, reliving their trauma. They take cover. Their hearts are racing.  They uncontrollably launch into fight or flight mode, running from what they perceive as imminent danger.

Our son, Andrew, age 27, also suffers from PTSD, though he has never been in the military.  Like a soldier, however, he has been through many life-threatening intense and invasive experiences due to FD.  He has been rushed to the emergency room over 30 times.  He has spent weeks and months in intensive care.  At one point, he spent half a year there, his body hovering terrifyingly on the edge of life.  During each hospitalization, his body was swept away by an “autonomic storm” or “crisis” placing him in grave danger.  As his autonomic nervous system went wild, he would uncontrollably retch.  His heart rate would skyrocket from 60 to 180 bmp.  His blood pressure would also steeply rise from 85/50 to 200/100.  He needed heavy medication to calm his system, substantial fluids via an IV or stomach tube, and round-the-clock monitoring. (For more on FD symptoms, click here)

Andrew has many PTSD triggers that, like hearing a gunshot, create an instantaneous stressful anxiety-filled flashback.  One trigger is seeing someone wearing scrubs; just the glimpse of hospital attire out in the world brings up sudden associations with his time in the ICU.  Another is when he needs to describe his crisis state to a new in-home nursing candidate.  As necessary as these discussions are for his ongoing care, each time he recites his story to explain his condition, he finds the horror movie of FD crisis intrusively replaying itself in his mind. By far, his worst PTSD trigger happens the three hours before bedtime.  His life experience has taught him that the horrific autonomic storms that rip through his body typically begin between 1am-4am, so he spends the last three hours of the day trying to manage rising panic about what the night might bring.  Knowing that certain foods can cause these horrible autonomic attacks, he anxiously reviews everything he ate during the day before trying to drift off.

Fortunately, Andrew works with a psychologist specifically trained in helping those living with chronic illnesses. Now, Andrew is better equipped to counter PSTD by using coping strategies: breathing, rational self-talk and distraction.  His PTSD is slowly getting better.  If you have FD or any chronic illness, and you are experiencing PTSD, you may want to seek help from a trained therapist.  Your trauma is real.  With practice, you can address your own PTSD triggers using techniques that will bolster your own emotional health.