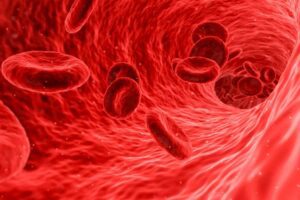 Did you know that most people with Familial Dysautonomia suffer from anemia? Anemia is defined as a low number of red blood cells. In a routine blood test, anemia is typically reported as decreased hemoglobin. Hemoglobin carries oxygen throughout the body. If hemoglobin is severely depleted, tissue and organs may not get enough oxygen. Symptoms of anemia, like paleness and fatigue, happen because organs are not getting what they need to function.

Our son, Andrew, a young adult with FD, struggles with anemia. For example, he needs several rests while walking through a big box store. Often, a long walk through an amusement park or an airport is too challenging and requires a wheelchair rental. He easily tires in the summer heat, and he lags behind on family outings.

Iron is helpful in treating anemia, as iron helps increase hemoglobin. Like many with FD, Andrew has tried several ways to increase his iron intake, such as oral iron tabs, but those create digestive issues, like difficult-to-manage tarry bowel movements. Andrew also tried iron infusions, but, like others with FD, he has floppy veins, making blood work problematic. Often, he would have to endure several needle pokes, and sometimes after three failed attempts, he would need to stop out of frustration and stress.

Recently, Andrew has discovered that several cereals are iron-fortified. For example, one serving of Multi Grain Cheerios provides 100% of daily iron! By consuming iron-fortified cereal, those with FD can avoid pasty bowel movements and multiple unsuccessful needle jabs.

Since Andrew does not like eating crunchy foods, even steeped in milk, he pulverizes the Cheerios in a coffee grinder and creates his own iron-fortified cereal flour. Andrew recently created his own delicious version of Cheerios Breakfast Bites. He looks forward to eating these each morning! By eating two each day, he consumes half of his daily iron needs. Click here for the recipe. More recipe experimentation with this iron-packed flour is in the works, as Andrew is already reporting an uptick in energy!